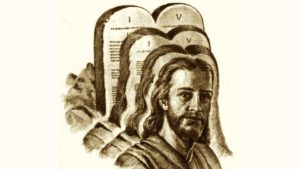 Law By Choice For Freedom started in the late 1980”s. I read an article in a magazine that said only about 16% of the youth in the United States know anything at all about the Ten Commandments. A country who, at the time, around 90% of the people said they believed in the Bible.

That which God wrote with his own finger on two tablets of stone with one of the grandest manifestations of His power and yet now most have never seen a full copy of that most important document! Movies have been made about it, most know that there has been a replica of the Ten Commandments on the court house lawn. People know they are in the Bible, but don’t know where to find them. When you do find a copy, almost without exception they are changed from what is recorded for us in the Bible.

Words everywhere; billboards, signs, books, tracts, advertising everywhere; and yet that which God wrote with His own finger and most have no idea what it says. The Bible, that book that most all of our Presidents have put their hand on when being sworn into office, has as the central theme throughout, the dwelt among us in the person of Jesus Christ, the Jesus Christ of the Bible. In the Bible we are warned that there would be many false “christs” that would come and deceive many.

Our goal is to make available to everyone in the world, who would like a copy, a poster of the full version, just as they are recorded for us in the Bible, of the Word of God written for all people as the ensign of God for people to know what is Truth.

“The LORD is well please for his righteousness’ sake; he will magnify the law, and make it honourable.” Isaiah 42:21

“Thine enemies roar in the midst of they congregations; they set up their ensigns for signs… We see not our signs: there is no more any prophet: neither is there among us any that knoweth how long.” Psalm 74:4,9

Help Law By Choice For Freedom spread the Word

A donation puts your spiritual fingerprint on every copy of God’s law that we produce.