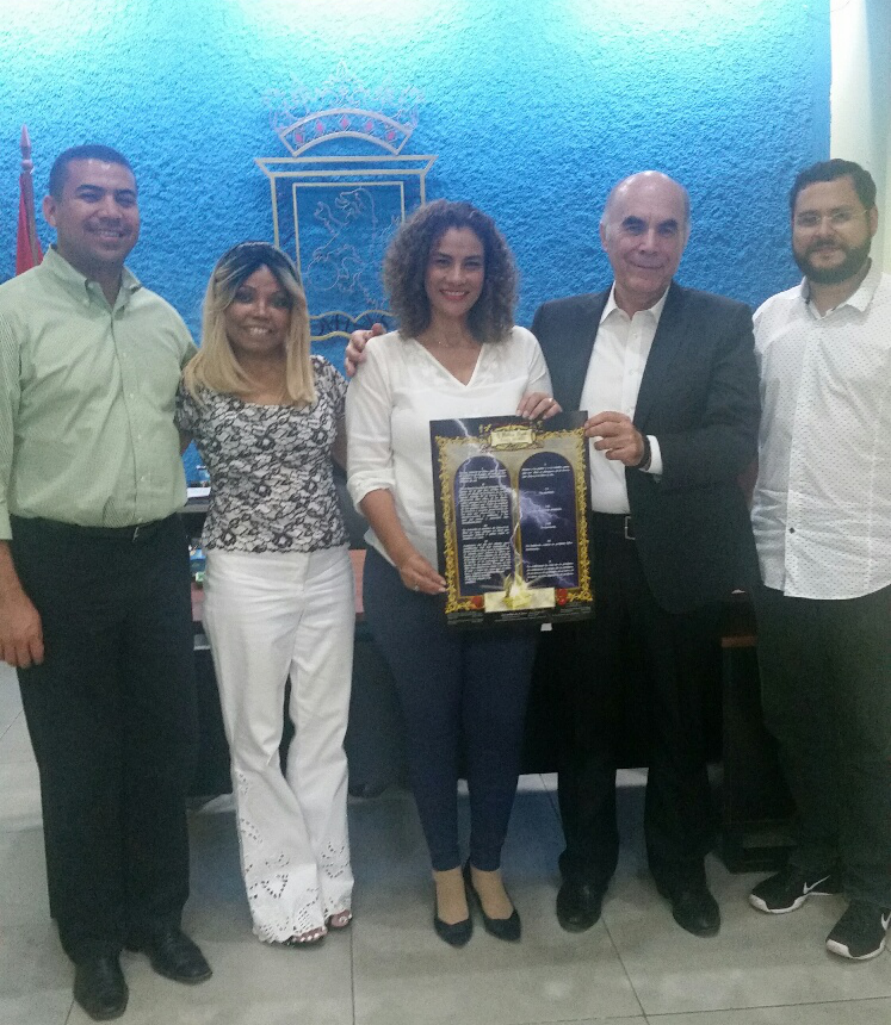 The trip to Nicaragua and Honduras went very well.  Here is a brief
summary:
Nicaragua.
1. While in Nicaragua they had us go on three stations and do interview
programs.  Once again we were able to teach
about Jesus in the first commandment, the door to our deliverance from
the bondage of sin.

2. We were also able to do two radio programs with Miguel Casco.  Miguel
also arranged for 4,000
posters to be distributed by some of his team in another city.

3. We had a very good meeting with the Mayor Reyna Rueda Alvarado of
Managua and she was
enthused about the project of distributing the Ten Commandments to
the people.

4. Received important message from Enock in Kenya thru email, about
potential to have young man
take thousands of TC posters to terrorist training camps in Somalia.

5. President Daniel and Vice President Rosario wanted to meet with us but
there was many emergencies that were
occurring at the time of our visit that prevented a meeting.  They
were working long hours to avert issues.  In one
of our communications we were urged to prolong our departure for a
couple days thinking a time slot would open.
But that was not meant to be.  1 Thessalonians 2:18

6. The night before our departure we were visited with some close aids and
family members to assure us that our
visits are very important.

7. Had an important dream that impressed me very much.  I don’t have
spiritual dream like that often, in fact I
cannot remember another one right now.  It was about love growing cold
in the world.  “And because iniquity
shall abound, the love of many shall wax cold.” Matthew 24:12  Will
explain in another letter.

8. Very encouraged, see more clearly than ever the power and importance of
our work in getting the TC before the
people and leaders.  Remember we teach that government must always
give freedom to worship or not worship
according to each persons conscience.  One day the battle will be over
who we worship, right now the battle is
over the second table, how we treat our fellow mankind.  Love to God
and Love to our neighbor the two great
tests for mankind.  We love the people and leaders, we are optimistic
lives will be preserved in Nicaragua.

Honduras:
1. We had only a couple days in Honduras.  Right after arriving and
getting settled in the hotel we went to radio
station that is popular all over the country and they put us on an
interview program.  It was very well received,
they repeated it several times.

2. We went to see President, Juan Orlando Hernandez, but we forgot the
framed Ten Commandment poster.  We
had posters but not the framed one.  We decided to try after leaving
the hotel without the framed poster but
they would not let us in the gates.  The next morning we took the
framed poster and they let us in and we were put
in the conference room to see the President.  We waited a long time
and then a couple came in and they were also
there to meet with the Presidents adviser about a program they run
feeding 15,000 children every day.  We talked
for some time and they were excited about what we were doing and want
to work with us.  When the adviser
came into the room they talked for a long time, the official asked us
why were were there and when we told
him to see the President he said ‘oh no they put you in the wrong
room’.  He got up and called secretaries and
took us into a Presidential greeting room we waited again and then
they apologized saying because of the
mix up it was too late (it was well after 5pm) and the President was
not coming back to the office again, they
hoped he would but found out he had an evening event.

3. It was providential that we were put in the wrong room and met Michael
and his wife, we are now communicating
with them about having them work with us on the spiritual side in
distributing the TC’s.

4.  When I arrived in Denver on the way home Alicia called and said the
Presidents secretary called and told her
the President was very sorry he missed us, he wants to meet with us
when we come back.

God’s Law will be magnified and made honorable by His Grace.  Thank you
each one for your support and prayers.
God bless,
Gerry

Help Law By Choice For Freedom spread the Word

A donation puts your spiritual fingerprint on every copy of God’s law that we produce.